Message Sent
Thank you for your inquiry. We will respond to you as soon as possible.

Planning for the future can be easy, inspiring, and rewarding. Request a FREE planned giving booklet today.

Already included us in your estate plan?

Thank you! Please let us know.

Support CBF by naming us a beneficiary of your assets by will, trust, or beneficiary designation form.

Ready to plan your will or trust? We would like to give you a FREE Wills Guide.

Transfer cash or appreciated property to CBF in exchange for our promise to pay you fixed payments (with rates based on your age) for the rest of your life.

You are at: Planned Giving > Gift Options > Donor Stories

You are at: Planned Giving > Gift Options > Donor Stories 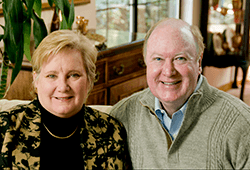 Susan and Kevin bought a vacant lot along Lake Michigan many years ago. They had planned to build a second home so that their children could spend their summers along the lake. However, as time went on, Kevin's job kept him in town and the children grew up before Susan and Kevin had the financial resources to build on the land.

Kevin: Over the years, that lot increased in value. It now is worth much more than what we paid for it. We paid about $40,000 for the lakeside property and it is now worth almost $200,000.

Kevin: I happened to be talking to a CPA at a community luncheon. He mentioned that we could probably give about twice as much with almost the same cost if we gave 25% of the property (prior to the sale) rather than writing a check after the sale.

After talking to our tax advisor, we discovered that if we gave a 25% interest in the property to charity, we would receive two benefits. We would get an income tax deduction for the value of our gift plus save on capital gains tax on the 25% interest given away.

Susan: That is what we decided to do. By giving charity a 25% interest in the property prior to the sale we saved the capital gains tax on that part. The deduction on that part offset a large portion of the tax on the $150,000 we received when the property actually sold. We are very pleased with the "double benefit" from giving the property, and our favorite charity received $50,000, a very nice gift.

*Please note: The name and image above is representative of a typical donor and may or may not be an actual donor to our organization. Since your benefits may be different, you may want click here to view a color example of your benefits.